Athens Festival proudly presents the young musicians of El Sistema Greece for the second time in its history at the Odeon of Herodes Atticus, in collaboration with producer, musician and DJ Blend Mishkin.
An unexpected event, in which the talented musicians of El Sistema Greece Youth Orchestra και της El Sistema Greece Youth Choir from over 40 countries join forces on stage with the reggae/soul band Roots Evolution by Blend Mishkin, a DJ and favourite Greek singer. Together, they present new interpretations of songs that left their mark on contemporary music, based in turn on older hits, thus introducing past music to younger audiences.
Since 2016, the El Sistema Greece rehabilitation programme offers free classes of music to children and youths at various locations in Attica and Corinth, including accommodations for immigrants, aiming to create a community built around music, without discrimination and obstacles. 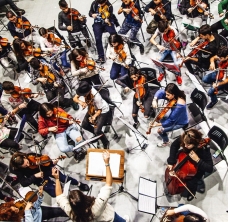