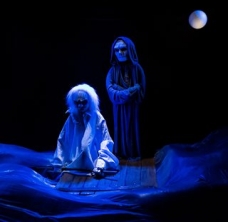 The subversive reworking of Aristophanes' comedy Frogs returns to the Alternative Stage of the Greek National Opera for two last performances. The eccentric duo Opera Chaotique with the uncommon aesthetics and the renowned Berlin-based Merlin Puppet Theatre, unite their forces, set Frogs in the modern age and present a thrilling story with musical alchemies, dark ballads, surreal imagination, hefty doses of black humour, impressive puppets and masks. In this reworking, Dionysus meets Edgar Allan Poe, Charles Bukowski and Artur Rimbaud, while Tom Waits' spirit wanders around the cabarets of Berlin casting away the nightmares haunting our dreams.

The work is set in modern times as a musical narrative. Dionysus, 2,500 years later, is still disappointed by people's low intellectual standards and decides to turn once more to the enlightened dead in the Underworld.
On his journey, he meets not just Euripides and Aeschylus, but also Rimbaud, Bukowski, Poe, Embirikos and other brilliant minds of the past, on a quest culminating in an unexpected twist.
Wars, the refugee problem, poverty, television, religious bigotry, they all aim at impoverishing the mind, the body and the soul. Can the intellectuals save humanity from this disaster? Or at least help? Is Aristophanes always topical or do we lag 2,500 years behind?
The comedy's adaptation, transferred in the modern age, approaches serious issues through humor and generates hope and optimism. The work of the ancients lives on and the work of the moderns is inspiring! They did what they could. What about us?