Europa on GNO TV
Two unique screenings on 18 and 19 December at 20:30
Eccentric Danish director Lars von Trier's masterpiece Europa (1991) comes to life through the eyes of Kostas Papakostopoulos, distinguished director and founder and artistic director of the Deutsch Griechisches Theater in Köln [DGT Köln], which celebrates its 30th anniversary this year. Europa's theatrical adaptation, a co-production of the Deutsch Griechisches Theatre - Köln and the GNO Alternative Stage, will be presented on GNO TV, the new web TV of the Greek National Opera.

Τhe international production of Europa and its presentation in Greece and Germany is made possible thanks to a (SNF) [www.SNF.org] Stavros Niarchos Foundation grant to the Deutsch Griechisches Theatre, while the launch and operation of GNO TV is realized thanks to the SNF grant for the enhancement of GNO's artistic outreach.

"You will now listen to my voice. My voice will help you and guide you still deeper into Europa. I shall now count from one to ten. On the count of ten, you will be in Europa."
(from Lars von Trier's film Europa)
Set in the ruins of destroyed Germany after the second world war, at the so-called Stunde Null (zero hour), Europa (1991), Lars von Trier's third film after The element of crime and Epidemic, presents the strenuous efforts for the reconstruction of a new Europe on the ashes left over by its violent past through an allegorical journey. The film stars a young idealist man of German-American descent who comes to Germany in 1945 and unintentionally becomes an object of exploitation by two rivaling camps: the fanatical Nazis, the so-called "Werewolf" guerrillas, and the American secret services.

The premiere of Europa's theatrical adaptation was held on 2 November 2019 in Cologne. The play portrays a modern-day citizen taking the same journey to that era's postwar Germany. The protagonist is fascinated by unexpected meetings and tormented by painful memories, which will lead him to put his values to the test and, in the end, reject them.

Herbert Mitschke's music and John Seidler's black and white videos create an evocative Kafkaesque atmosphere in this nightmare journey through Europe's history. In a time of increasingly bigger disputes, controversies and doubts about the future of the European Union, the director borrows Lars von Trier's motifs to bring out the dangers lurking in its future through Europe's violent past.

The train runs as if it is possessed, with its shutters down, across Europe's bombarded landscape. Can anyone change its course?

With the support of the Greek Ministry of Foreign Affairs, the Ministry of Culture of North Rhine-Westphalia, Germany, and the City of Cologne
Founding donor of the Alternative Stage/ Performance sponsor
Stavros Niarchos Foundation (SNF) [www.SNF.org] 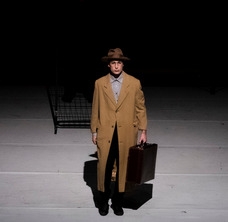 First come, first served
- To watch the stream, viewers must have access to the internet and use a device (PC, laptop, smartphone, tablet, etc) through a browser that supports HTML5, EcmaScript 6+. They must also ensure that cookies are enabled in the browser.
- Smart TVs are supported by connecting the TV with the playing device through an HDMI cable. Some SmartTVs may provide web browsers that support the embedded player.
TERMS AND CONDITIONS
(click here)