The legendary Lilipoupoli, the radio programme linked with Manos HadjidakisΆ reigning era at the Trito Programma of the Hellenic Broadcasting Corporation (1976-1980), which raised generation after generation of Greek people, now comes alive at the Roman Odeon once again, taking us along for a ride through Marianina KrieziΆs song lyrics, with music composed by Nikos Christodoulou, Nikos Kypourgos, Dimitris Maragopoulos, and Lena Platonos. Singers Tassis Christoyannis, Doros Dimosthenous, Lenia Safiropoulou, and Savina Yannatou will lend their voices, joined by the Rosarte Youth Choir and 17 members of the Ventus Ensemble. Nikos Christodoulos will serve as conductor and artistic supervisor.

For the first time ever, certain Lilipoupoli songs will be performed in the Greek Sign Language by the Rosarte Youth Choir, coached by Sign Language Centre “Kivotos Polyhoros”. 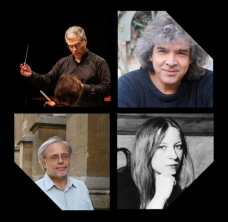