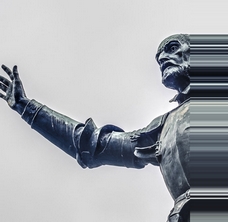 The production is made possible by a grant from the Stavros Niarchos Foundation (SNF) [www.SNF.org] to enhance the Greek National Opera's artistic outreach

In the context of the new preventive measures against the spread of the coronavirus announced by the Government, including the suspension of the operation of theatres for one month starting from 3 November 2020, the Greek National Opera announces:
The suspension of the first two performances of Don Quixote, that were scheduled for 21 & 29 November.
All ticket holders of the suspended performances will be contacted by the Greek National Opera's box office to be offered a refund or the possibility to exchange their tickets for another performance date or for another production. GNO Box Office call center: 2130885700 (daily 09.00-21.00).

The Greek National Opera Ballet opens the new season with the new ambitious production of Ludwig Minkus's Don Quixote, which had been scheduled for last March but had to be cancelled due to the pandemics. Thiago Bordin's choreography is based on Marius Petipa's classical choreography, that premiered in 1869 at the Bolshoi Theatre.
Don Quixote is one of the greatest and most popular classical ballet repertoire works. Through Minkus's unique music, the choreography tells an enduringly moving story about the lofty ideals of chivalry, combining comic and romantic elements.
For Don Quixote's new production, the Director of the GNO Ballet, Konstantinos Rigos has chosen an ensemble of world-class artists: choreographer Thiago Bordin for the revival of Petipa's classical choreography, internationally acclaimed Greek set designer George Souglides for the sets and the famous Greek fashion designer Mary Katrantzou for the costumes. Alongside them, animation designer Eirini Vianelli and lighting designer Christos Tziogas.
Konstantinos Rigos notes: «As classical ballet is the main direction of the GNO Ballet, from the first moment I assumed its directorship, I had in mind for us to present a classical Don Quixote. It is a work I love, and I believe that our team can perform it at a very high level. Of course, my idea of classical has nothing to do with dusty paper sets and mothball-smelling costumes. That is why from the very beginning I aimed at artists that have a special take on things and a unique aesthetic. For the creative revival of Petipa's choreography we invited the distinguished choreographer and dancer of the Hamburg Ballet and the Nederlands Dans Theater, Thiago Bordin. Τhe set is designed by our highly inspired set designer George Souglides, who excels at Europe's opera houses, along with animator Eirini Vianelli. For the costumes we have the pleasure to bring for the first time to the Greek National Opera, the top Greek fashion designer with the unique international career Mary Katrantzou, who redefines in an exceptional way the meaning of the ballet costume. Along with the Orchestra, conducted by Stathis Soulis, and the unique dancers of the Greek National Opera's Corps de ballet, I am certain that we will create a Don Quixote at once classical and modern.»
The GNO Orchestra will be conducted by the up-and-coming conductor Stathis Soulis.

In line with the restrictive measures for the protection of public health against the spread of the coronavirus (COVID-19) announced by the Greek Government, the Greek National Opera's Stavros Niarchos Hall will operate at 30% maximum capacity, namely, with 420 seats out of a total of 1,400. Moreover, it is noted that according to the instructions of the Greek State, tickets will only be purchased online or by telephone, the use of mask will be obligatory when entering and exiting the building and throughout the performances, on either side of each seat (single or double) there will be at least two empty seats left, overcrowding shall be avoided, and the prescribed physical distance between viewers and between the audience and the stage / orchestra shall be maintained, while special protocols are in place for the cleaning, disinfection, air-conditioning and ventilation system of all areas of the GNO at the SNFCC.