Written in the aftermath of AtheniansΆ crushing defeat at the Sicilian Expedition, EuripidesΆ Helen is noted both for its anti-war qualities and its focus on virtues such as the power of oath and intelligence, both personified in the form of the titular heroine. Drawing on the version of the myth created by lyrical poet Stesichorus instead of HomerΆs best-known version, Euripides portrays the Trojan War as a massacre committed for a phantom rather than a real woman. A tragedy almost verging on comedy, Helen is now presented at the Ancient Theatre of Epidaurus in a National Theatre of Northern Greece production, directed by Vassilis Papavassiliou.

Assistant to the director Anna-Maria Iakovou

Assistant to the set and costume designer Elli Nalmpanti

Assistant to the choreographer Sofia Papanikandrou 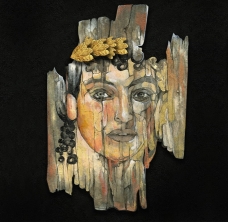