The Athens Philharmonia Orchestra (est. 2016) has been consistently focusing on modern Greek music. Under the baton of conductor Byron Fidetzis, acclaimed for his research on modern Greek music, the Orchestra presents a masterpiece at this yearΆs Festival: Nikos SkalkottasΆ 36 Greek Dances. Skalkottas began composing this iconic work in 1931. Until the end of his life, in 1949, he continued arranging it for various ensembles. The Greek element becomes a source of inspiration, a liberating force leading to genuine art.
This year's presentation of 36 Greek Dances is based on the work's musicological reconstruction by Byron Fidetzis, responsible both for the first world recording (1990) and the first public performance (1997) of 36 Greek Dances as a complete work. 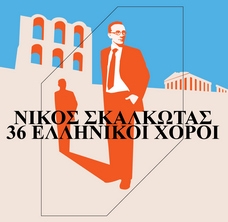