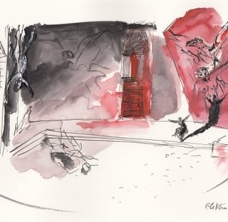 Exclusive sponsor of the production: MYTILINEOS

Greek National Opera inaugurates the new chapter in its history at its new facilities at the Stavros Niarchos Foundation Cultural Center with an ambitious venture, having chosen an insuperable operatic masterpiece with a Greek storyline as its first work; none other than Richard StraussΆ Elektra based on the tragedy of that name by Sophocles.
Elektra has been dubbed one of the most important, yet also most demanding, 20th century operas. Staging the work is a major challenge for the Greek National Opera and its musical ensembles because the particularly complex score, in which Strauss pushes expressionistic delivery to the limits, almost touching upon tonality, requires around 110 musical instruments.
StraussΆ Elektra has never before been performed by the Greek National Opera. The symbolism operates on many levels, since a work with a Greek theme has been chosen, inspired by the myth of the house of Atreus, which will play a major role in the Greek National OperaΆs overall program for the next 3 years, but is also a 20th century work since one of the Greek National OperaΆs intentions is to demonstrate that opera, the lyric art, and musical theater did not come to an end in the 19th century.
The production also marks the first collaboration between the Greek National Opera and world class Greek contralto Agnes Baltsa, who will star as Klytemnestra in all performances, which will be directed by the international Greek director and set designer Yannis Kokkos, and conducted by the internationally acclaimed conductor Vassilis Christopoulos. The acclaimed German soprano Sabine Hogrefe stars in the title role. Renowned Greek baritone Dimitris Tiliakos will be debuting in the role of Orestis.
Do we have your permission to store cookies to your browser? This way we and third parties (Google, Facebook etc) will be able to track your usage of our website for statistics and advertising reasons. You may read more on the cookies usage in our website clicking here.
Yes, I allow No, I don't