We are thrilled to announce 3 exciting new additions to our festival which grows bigger every day with your continuous support!

The band whose name is synonymous with the revival of traditional heavy metal returns to Greece for Up the Hammers Festival! The fan-favorites Swedes, in Greece and worldwide, have prepared a spectacular show with anthems from their remarkable 14 years of discography. Enforcer gained global recognition with the release of their first 4 albums, before releasing "Zenith" in 2019 and touring the world extensively, to the delight of their supporters. We simply cannot express how proud and excited we are to have them at our festival!

NWOBHM legends Tytan will visit Athens for the UTH festival! Formed in 1982 by Kevin Kevin "Skids" Riddles, after his departure from Angel Witch, Tytan released their debut EP "Blind Men and Fools" in the same year. Their all-time classic "Rough Justice" was recorded at that time, but didn't come out until 3 years later, when Tytan had already disbanded. The 2010s found the band reformed with a new lineup, which led to the release of "Justice: Served!" in 2017. After a series of exciting live shows, we are more than delighted to have them in Athens!

Newcomers from Utah, USA Bloodstar is the new creative endeavor from Visigoth guitarist Jamison Palmer whose new outlet harkens back to the classiest, most cruising, but also the darkest heavy metal of the 1980s. Their debut single titled "The Fear" was released in 2020, featuring two amazing songs of relentless classic heavy metal. Blood Star are set to release their long-awaited debut album in the near future and we couldn't be more excited!

Riot V Feat. Harry "The Tyrant" Conklin Special Show
Fan favorites Riot V will be headlining the festival with a very special guest on stage! Harry "The Tyrant" Conklin (Jag Panzer, Titan Force ex- Riot) will be joining the band to perform together on a very special exclusive show. The US power metal legends will play all-time favorite anthems from their illustrious career, honoring the memory of the late Mark Realle who formed the band in 1975.

Exciter (40 years anniversary Heavy Metal Maniac Exclusive Show)
We proudly announce the Speed Metal Legends Exciter for an exclusive show that celebrates the 40 years anniversary since the release of their legendary debut album "Heavy Metal Maniac". The iconic speed trio from Canada choose Athens and UTH XVII to be their battleground to perform songs from one of the most celebrated albums in speed metal history for their fans!

Toxik
One of the most requested bands will finally make their appearance in Greece for the first time ever! World renown for their unique style Technical Speed Metal, Toxik released two monumental albums in 1987 (World Circus) and in 1989 (Think This) and since their reunion in 2013 released 2 EPs and two full length albums, including this year's "Dis Morta"

Riot City
We are thrilled to present you one of the hottest NWOTHM bands in the planet, Riot City! The Canadians became known in the traditional heavy metal scene when they introduced their debut "Burn the Night", which was one of the top releases of 2019. Their new album "Electric Elite" is destined to follow on the same path, when it will be released by No Remorse Records this October.

Dark Quarterer (Exclusive first two album special show)
Italian Epic metal legends Dark Quarterer will return to  Athens for UTH XVII and they have prepared an amazing special show! The band will play songs only from their first two albums, the 1987 self titled debut and their 1988 second album "The Etruscan Prophecy", for an exclusive appearance before the fans!

Blazon Stone (First show in Greece)
For the first time ever, the Blazon Stone pirate armada will be docking in Athens and the Up the Hammers! The Swedish NWOTHM pioneers released 6 outstanding pirate themed, speed/power metal albums since their formation in 2013. Their latest album "Damnation" was released last year marking their return after a short hiatus.

Seven Sisters
London's premier twin-lead Heavy Metal four piece, Seven Sisters, will return after 7 years to up the Hammers Festival! After releasing 3 highly acclaimed LPS and one EP, the band are preparing to unleash their brand new album "Electric Elite" this fall.

Midas
Hailing from Detroit, Michigan, Midas will be joining the ranks of Up The Hammers Festival, following the release of their first, self titled album this year. Playing old school heavy metal of the highest quality, the band will be playing their first ever European show.

Darklon
Greek metallers Darklon will open the gates of Up the Hammers festival 2023, promising a show to remember!.  The band's debut album "Rise from Death" was released in 2019 and they perform top notch heavy power metal in the vein of old school USPM. Their sophomore album is already completed and recorded and will be scheduled for release in the first half of 2023 by No Remorse Records. 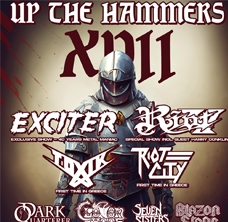