PUBLIC
- all PUBLIC stores
- at tickets.public.gr

E-TICKET
Purchasing your ticket online, you may download in PDF format and print it. 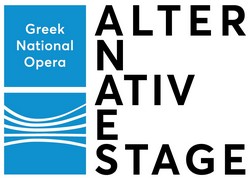 In the rode of Men, Aimon Garofallou
In the role of Woman, Elena Kelesidi

Commissioned by the GNO Alternative Stage
«Elle», She, through a long telephone call with interruptions and pauses, experiences the painful epilogue of a love affair with her beloved one, «son chéri». A monologue about betrayed love and the absolute loneliness beyond gender, age and time.

After forty years of friendship with Jean Cocteau, Francis Poulenc composed in 1958 this one-act «lyric tragedy» based upon the theatrical monologue of the same title that the author wrote in 1928. The inspiration for both these creators was the end of a painful love affair. In the beginning, his publisher had proposed that Poulenc composed the monologue for Maria Callas, who at that time was at the apogee of her fame. However, the composer chose to collaborate with the French soprano Denise Duval, whose tempestuous love life he knew of and who had just recently performed Blanche in his opera Dialogues des Carmélites, which had been successfully presented at La Scala in Milan in 1957. Duval helped to transcribe the play for the opera and later on she was also the first one to interpret the role.

The renowned Greek soprano Elena Kelesidi is called upon this year to live the last forty minutes of a relationship and may be of a life...