For the purposes of the Association of friends of children with cancer (Elpida)
The piece is an ode to MichelangeloΆs artistry as materialized in one of his most crucial sculptures: The Pieta.

The Pieta (1498–1499) captures the moment when the body of Christ lies on the lap of the Virgin Mary after his Deposition from the cross of his martyrdom. Despite the iconographic complexity of this emotionally charged moment, Michelangelo succeeds in expressing all aspects of this intricate scene in an effective and holistic manner. The experience of this masterpiece is manifold as it may evoke different and contradictory emotional reactions to its viewers. The idea of a mother accepting the inevitable doom of her son, alludes to a scene of a tragic death but, surprisingly enough, inspires a sense of immense relief. The unbearable but, still, necessary mourning. One is found in absolute awe in front of the Pieta, because of its divine connotations, its immense sense of exultation, despite its tragic nature.

The notion of the body is key for the understanding of MichelangeloΆs artistic oeuvre. Throughout his life he focused on the exaggerated depiction of the musculature of the human figure and on the notion of the beautiful body, not in its idealized form, but in extreme motion.

In the piece seven dancers are called upon to translate the approach of Michelangelo towards the human body into their movement on stage. From absolute stiffness and stillness to extreme motion. From resistance to acceptance. The dancers are accompanied by one musician who performs live on stage the original soundtrack composed by Sotiris Tsolis, and by the pre-recorded musical compositions of George Kravvaritis.
Tuesday 16 April 2019
Time and Duration: 21:00 (55 min)
Credits
Conceptualized | Directed | Choreographed: Antonia Oikonomou
Music Composer: Sotiris Tsolis
Composition of pre-recorded music: George Kravvaritis
Artistic Directοr: Antonia Oikonomou

Production: ERGO
Antonia Oikonomou is a choreographer, artistic director and performer. She was born in Athens in 1995. Antonia creates material through an ongoing process with dancers and artists in the form of long term workshops. She attributes great emphasis in creating original music compositions for her pieces. Her close academic relationship with the History of Art constitutes her primary source of inspiration for creating images on stage. Antonia is also the artistic director and curator in most of the pieces that she conceptualizes and presents.

She is the founder, executive producer and artistic director at ΕRGO Collective (https://ergocollective.org/). ERGO Collective is a multileveled artist platform which follows a multi-interdisciplinary approach. It questions and elaborates on the borders between all Art disciplines, in terms of creative process and the experience of the viewer/ participant. Through the collaborations which arise between the collective and artists from Athens and abroad, Antonia finds a way to form her artistic process as an open field, not limited in the theatre space, as it extends in the Visual Art practices.

Her upcoming piece, PiETA II, will be presented on April 2019 in the Alternative Stage of the Greek National Opera at the Stavros Niarchos Foundation, for charity purposes (Association of Friends of Children with cancer, Elpida). PiETA II is a revised, reworked and revisited version of her previous piece PiETA with new artists, images and original music compositions. The PiETA was originally presented by Antonia at the Roes Theatre in May 2018. 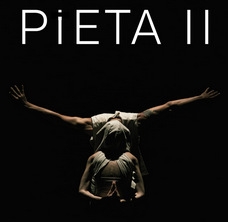 E-TICKET
Purchasing your tickets online, you may download them in PDF format and print them