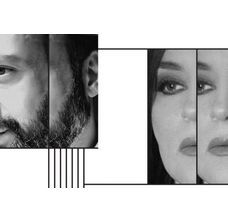 For ages 18+
Points of sale
- online: www.snfcc.org
- online: www.ticketservices.gr
- Stavros Niarchos Foundation Cultural Center (GNO box office)
- Ticket Services box office (39 Panepistimiou Str)
- call center: 210 7234567 (Ticket Services)
Printing your tickets
Please download your tickets in a PDF form. You may print them or have them stored into your mobile phone, in order to check in on the day of the event.

Booking period
- Pre-sale starts on Tuesday 03/03 at 09:00 for the SNFCC Members (Up to 50 seats for Members and Guest).
- Pre-sale starts on Wednesday 04/03 at 09:00 for the public.
In case of postponement or cancellation of the event due to public health measures you will be notified via email. For information and updates on the SNFCC event schedule please visit our website snfcc.org.

In line with the precautionary measures for the protection of public health, the event Parabases: Sarah Kane - 4.48 Psychosis, scheduled for Sunday March 22nd, is suspended until further notice

Parabases continues its survey of pioneering voices in literature, theater and poetry, focusing on women - women writers and poets who left their mark on the literary arts through their trailblazing work, as well as iconic female fictional and dramatic characters, who find their voice in the Parabases literary salon under Dimitris Karantzas's directorial gaze.

"I had a night in which everything was revealed to me.
How can I speak again?"

"Sarah Kane died tragically. Everyone's aware, to varying degrees, of the cruelty of mankind, but we manage to compromise with it, put it on the shelf and not think about it for a good part of the day.  But I don't think she could do that. She was so naked, and her work was evidently so naked. She had no protective skins at all," wrote Harold Pinter for the most iconic playwright of the British in-yer-face theater.

Overshadowed by her impending suicide, in 1998 Sarah Kane wrote 4.48 Psychosis - a landmark of contemporary playwriting distinguished by its linguistic intensity, vertiginous structure and frightening death. It conjures the innermost thoughts of someone who is about to take their own life. Although Sarah Kane does not specify the setting - though the title suggests a psychiatric hospital at 04:48 a.m., the time when suicides peak, statistically speaking - the playwright ingeniously divides the monologue among the inner voices that well up inside a person at such a defining moment in their lives.

4.48 Psychosis, translated into Greek by Roula Pateraki and Antonis Galeos, is kindly provided by the translators.