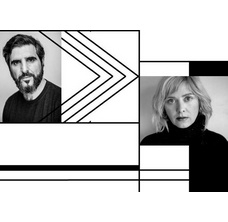 For ages 6+
Points of sale
- online: www.snfcc.org
- online: www.ticketservices.gr
- Stavros Niarchos Foundation Cultural Center (GNO box office)
- Ticket Services box office (39 Panepistimiou Str)
- call center: 210 7234567 (Ticket Services)
Printing your tickets
Please download your tickets in a PDF form. You may print them or have them stored into your mobile phone, in order to check in on the day of the event.

In February, Parabases - SNFCC Reader's Theater present a new rehearsed reading of Sappho's poetry. Yiorgos Gallos and Theodora Tzimou attempt an encounter, in the original and in translation, with one of the greatest lyric poets of archaic Greece.

Parabases continues its survey of pioneering voices in literature, theater and poetry, focusing on women - women writers and poets who left their mark on the literary arts through their trailblazing work, as well as iconic female fictional and dramatic characters, who find their voice in the Parabases literary salon under Dimitris Karantzas's directorial gaze.

"But to grasp the sky I do not attempt..."
Sappho

Although barely two of her poems survive intact, her extant fragments dating back to the late 7th century BC continue to speak in a contemporary voice, as if they were written only yesterday. Honored in Antiquity as the "Tenth Muse" - a sole exception in the male-dominated classical canon - for her incomparable use of meter and her inspired verse, as personal, authentic and sincere as no other lyric poet's for centuries to come.

The celebrated - yet still "unknown" - Sappho evokes continued fascination and captures the imagination of everyone who comes into contact with her verse. Odysseus Elytis felt a profound eclectic affinity linking him back to the lyric poetess, whom he regarded as a "distant cousin" and described her poetic achievement in admiration.

"There is no better example of the power of poetic discourse. Mutilated strophes, half lines, broken words, barely a thing - and out of this nothingness, a miracle. If gems of phrase can be salvaged from these surviving fragments, it must be assumed that a treasure trove of words full of contemplative power, bold similes and original images must have animated the nine poetic books written by Sappho."
Odysseus Elytis, Sappho

To this day nature, the moon, love, desire, the dance of life, the beauty of a maiden continue to gleam in Sappho's poetic fragments.

*Pre-sale starts on Monday 03/02 for SNFCC Members (up to 50 seats for Members and Guest).