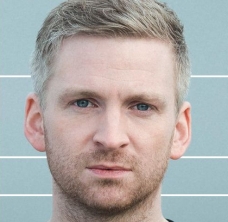 SNFCC's Cosmos concert series presents, for the first time in Greece, Ólafur Arnalds, a multi-instrumentalist, composer and producer, in a unique performance at the Stavros Niarchos Hall.

One of the most gifted contemporary classical music artists and composers of his generation, Ólafur Arnalds combines strings and piano with electronic sounds in striking manner, creating ambient symphonic compositions that evoke journeys to Icelandic landscapes. His experimental compositions introduce classical music to a broad public, broadening our musical horizons.

Since 2007, Ólafur Arnalds has released four solo albums; he has also collaborated with preeminent music, dance and film artists, including Sigur Rós and Nils Frahm. In 2014, his inspired music for films and television series earned him a BAFTA Award for Best Film Music for the soundtrack of the popular British series Broadchurch.

His latest album, Re:Member (2018), which he will perform in his SNFCC concert, builds upon a mosaic of influences by many different music genres, translated into the artist's own idiom and keeping listeners on their toes by evoking new and exciting feelings.

- Late seating may be possible in case of an intermission or pause.

Announcement of a second concert
the same night at 23:00
(see the announcement at www.snfcc.org)

Υou spoke, we listened and now we have good news to share! As the entry passes for Ólafur Arnalds concert on 20/05 disappeared within a few minutes, we secured, in collaboration with the artist, a second show, on the same night, at 23.00!

Entry will be free to this concert as well, thanks to an exclusive grant by the Stavros Niarchos Foundation.

Useful info:
- Electronic preregistration will start on Friday 17/05 at 12 noon
- Each person can reserve up to two entry passes
- As we expect the demand to be high again, it is very likely that it will sell out very fast
- After the 23.00 concert, we added two more free shuttle buses from the SNFCC to Syntagma; the first at 00.40 and the second at 01.00