INTO THE WOODS | Stephen Sondheim 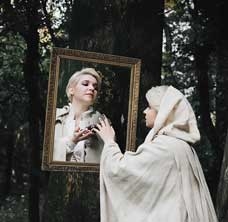 Children tickets
For this production only persons over 12 years old are allowed to admit.

The classic and multi-awarded musical Into the woods (1986) by top composer and lyricist Stephen Sondheim, an unconventional creator who has won Oscar, Tony, Grammy, Pulitzer and Laurence Olivier awards, is presented for the first time in Greece in a big production of the GNO Alternative Stage.

Beloved fairy tales of Brothers Grimm and Charles Perrault and unique compositions of Stephen Sondheim come together in a subversive Broadway musical of high artistic value which still enchants and moves children and adults. Red Riding Hood, Cinderella, Jack and his beanstalk and Rapunzel are all involved in a dark story with interlocking parts which diverts them from their known paths and has an unexpected twist, exactly as in real life.

Into the woods gives the heroes of these timeless fairy tales a rude awakening leaving them to get lost in the woods along with their expectations and wishes for a happily ever after ending. In the end, however, the American dream is shattered and, both with a rampant honesty and a disarming humour, this modern fairy tale's antiheroes will experience a brutal coming-of-age on their way out of their adventure.

With James Lapine's masterly libretto and Stephen Sondheim's unsurpassable music as a vehicle, talented director Dimitris Bogdanos attempts an alternative staging of Into the woods with a special eye and sensitivity. Using musical's stage power, he reintroduces a masterpiece of its genre, while raising the following question: Why do we spend irrationally large amounts of energy on desires that are not even our own?