The Magic Pillows - a hugely successful opera production for all the family is transferring to the small screen to reach children, and adults too, on their phones and tablets, their computers and television sets, premiering on GNO TV on 5 December. This well-known work by Eugene Trivizas - which met with great success both as a novel (translated into many other languages, and the winner of numerous awards) and as a theatre play - was adapted by the author himself to debut as an opera for all the family, set to music by George Dousis, and breathing life into the dreams of young and old alike. This production is made possible by a grant from the Stavros Niarchos Foundation (SNF) to enhance the GNO's artistic outreach.

This hopeful, moving, and meaningful fairy tale by Trivizas tells the story of some children at an unloved school and their inspiring teacher, who together take a stand against the greedy King Glorious the Omnificent, quite determined to reclaim their lost dreams.

The emotionally rich and melodious music of George Dousis winningly winds its way around breath-taking palace halls, neglected classrooms, and gloomy emerald mines, breathing life into this spirited band of characters. Meanwhile, the fast-paced, funny, and emotion-filled staging by Natasha Triantafylli goes straight to the poetic heart of this redemptive and limitlessly rich classic tale.

With a 10-euro ticket, viewers can enjoy this production from the comfort of their homes at tv.nationalopera.gr/en, at any time they choose, on their computer, ipad, TV or mobile phones. The ticket offers the possibility to access the performance for an unlimited number of times over the course of a 30-day period starting from the first streaming. 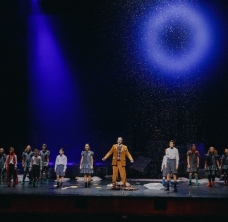