Available for on-demand streaming
until 31 July 2022

After its premiere on the Alternative Stage of the Greek National Opera, distinguished composer Alexandros Mouzas' new music theatre work Shades in Hades, directed by Thomas Moschopoulos, comes on GNO TV. This music theatre work for actor and musical ensemble will be available on nationalopera.gr/GNOTV/en from 1 April until 31 July 2022. 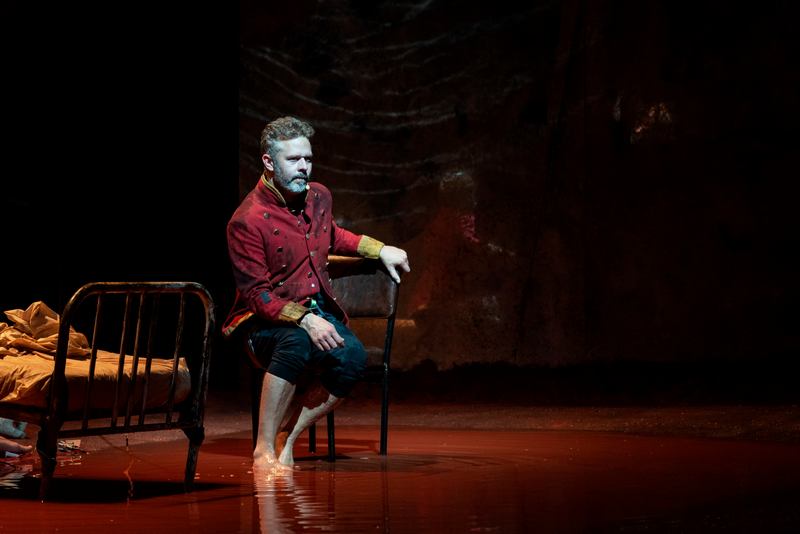 Shades in Hades makes use, exclusively, of Lord Byron's original texts selected from his last letters from Greece, his narrative work Childe Harold's Pilgrimage, his play Cain, as well as his poems. The work describes Byron's descent, as an archetypical "fallen angel", into the humid and dystopian environment of Missolonghi, into a Hades that sets traps in his Shades, into an absolutely Greek Gothic environment.

Against the background of an an evocative, soaked set vividly conveying the sense of a fantasy-like Hades full of shades, premonitions and memories, Alexandros Mouzas' atmospheric music flirts with a film aesthetic, while accompanying in a unique way the taxing performance of actor Christos Loulis. The latter delivers in turn an ideal reading of Lord Byron, as a man who is playful and poetic, obsessive and captive of his passions, but also a glorious architect of his own fate.

The production, part of a tribute to the 2021 bicentennial of the Greek Revolution, is made possible by a grant from the Stavros Niarchos Foundation (SNF) [www.SNF.org]. 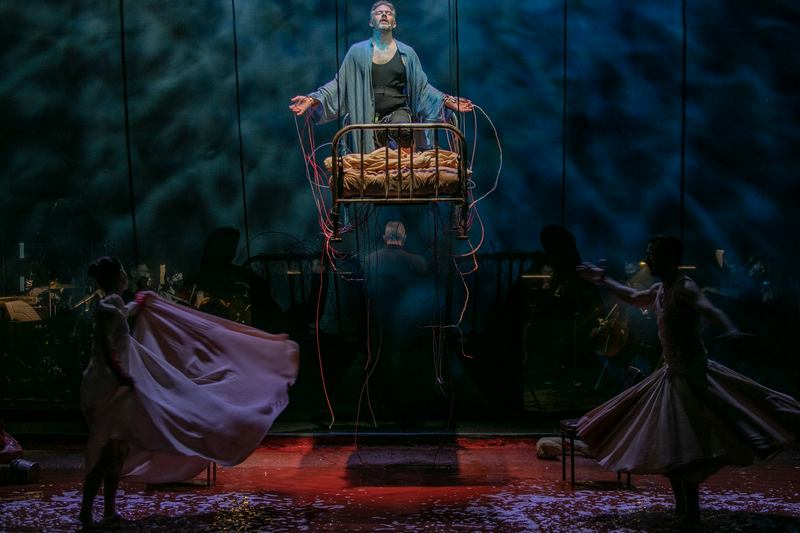 Shades in Hades was commissioned by the GNO Alternative Stage and is part of the thematic cycle "Odes to Byron", which pays tribute to the emblematic Romantic poet and philhellene. The work is presented in collaboration with The Messolonghi Byron Society.

Eloquence, humour, empathy, biting irony and a slew of valuable biographical, historical and ethnographic information typify the almost 3,000 (!) letters of Lord Byron that have survived to this day, on the merits of which he is widely considered as one of the greatest letter-writers of the 19th century. From this unruly and inexhaustible body of texts, Alexandros Mouzas, composer and curator of the GNO Byron Cycle, chose the letters written during the poet's final three months at Missolonghi, alongside excerpts from writings, thoughts and poems by Byron, as material for his new music theatre work.

Byron's tireless attempts to unify the warring Greek factions, financially assist the Greek War of Independence, raise consciousness about the Greek cause abroad, offer humanitarian help to the war's victims and take care of his personal affairs before being raised (through his untimely death) to the status of international symbol of the philhellenic movement, thus decisively arousing the interest of foreign powers in the Greek struggle, are represented in an innovative first-person monodrama combining a contemporary musical idiom with thorough historical research.

A catalyst in deciding the work's structure was an apostrophe in one of Byron's letters to his editor Thomas Moore during the time he was writing Childe Harold's Pilgrimage: "I was half mad during the time of its composition, between metaphysics, mountains, lakes, love unextinguishable, thoughts unutterable, and the nightmare of my own delinquencies."

Alexandros Mouzas's music has an almost cinematic perspective, attempting to bring out new messages in a contemporary way through a personal reading: "There are no musical borrowings, nor is it reminiscent of musical references of the time or of tradition. In the letters, the actor is at liberty to handle the text within specific time limits, while in the poems, the score requires absolute precision in the delivery of speech and the actor assumes the role of a soloist. In-between large orchestral parts are interpolated, serving as a commentary on the stage action.", notes the composer. 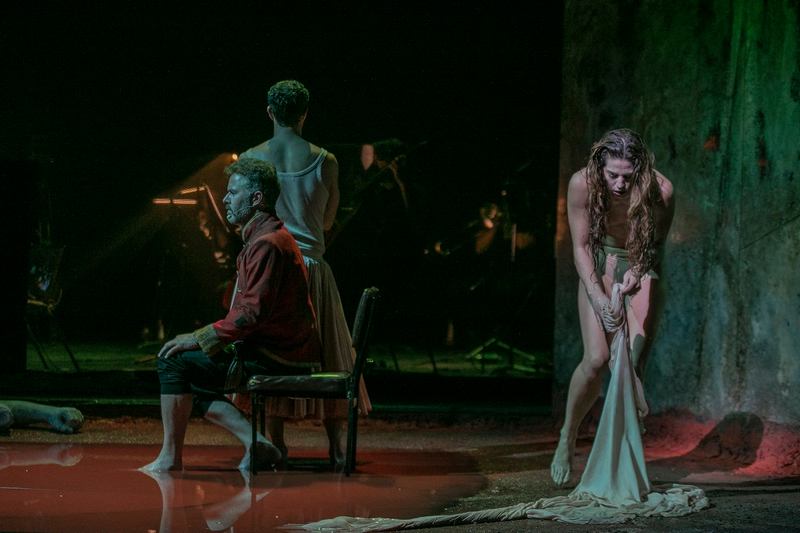 With the participation of an 11-member instrumental ensemble

Founding donor to the Alternative Stage & the 2021 bicentennial of the Greek Revolution: 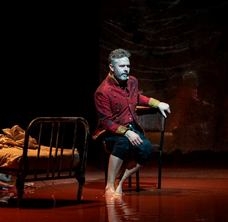 Available for on-demand streaming until 31 July 2022