Available for on-demand screening
from 14 March until 31 July 2021
on nationalopera.gr/gnotv/en

Haris Vrondos has been one of the most consistent voices in the Greek music theatre scene of the last decades, having composed numerous operas. Two of his one-act chamber operas, Requiem Akhmatova and The Anniversary, are presented in a double bill by the GNO Alternative Stage. 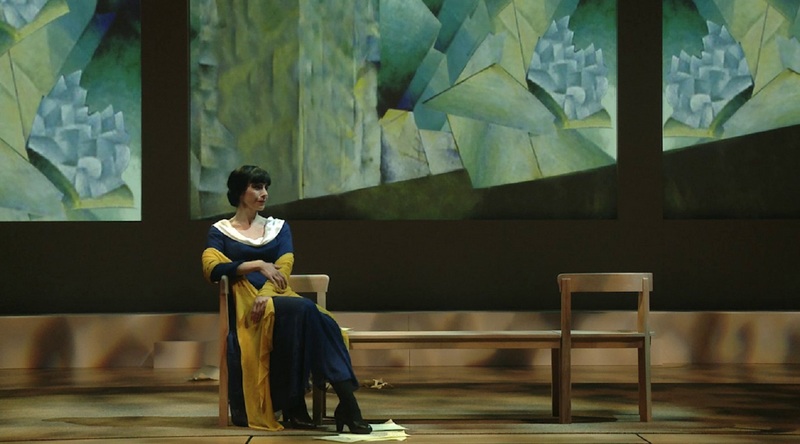 At a glance – Synopsis

Requiem Akhmatova, to a libretto by Haris Vrondos, based on the adaptation of a poem of Anne Carson by Haris Vlavianos, starts off with the life of the great Russian poetess and raises questions about the relationship between art and power. As the composer notes, “Requiem Akhmatova includes, in the form of lyrics, incidents of extermination, cold blood murder, imprisonment and exile of poets and artists who didn't blindly succumb to the doctrine of socialist realism in art. In the same period, convicted as decadent artists, many writers, musicians and painters, mainly Jews, were killed and exiled, and saw their works being burnt or banned by the Nazi regime in Germany, Austria and Central Europe''.

The Anniversary, based on a libretto by the composer and by poet Yannis Ioannidis features writer Yannis Beratis in a play between incidents of the Civil War and its perpetuation in the field of historical memory.

“My two chamber operas are a reflection on ideas or ideologies that defined my youth. Their subject is the explosion of violence and the suppression under the cloak of socialism in Russia (Requiem Akhmatova) and in Greece (The Anniversary or The Descent of Y. Beratis). In the second opera, we also see the decadence and the amorous desolation of a writer, situations connected with the Greek civil war. I believe that it is an effort to understand the deeper world of a creator of the '30s. The works were not commissioned by anyone, something that unfortunately happens often in Greece. In the forty years I've been working I have received only three or four commissions”, notes Haris Vrondos.

Poetess Anna Akhmatova (1889-1996) discusses with the work's Narrator while he unfolds the chronicle of her life in 13 images. These images highlight, among others, the horrible Bolshevik crimes: murders, group executions, tortures, exile, bans and the censorship on the artworks of that period's creators.

The Anniversary or The Descent of Y. Beratis

Author Yannis Beratis (1889-1996) is invited in Amfissa in 1966 as a guest speaker at the unveiling of the bust of colonel Psarros (1893-1944). There, at the painting exhibition of the fallen warriors of regiment 5/42, he meets a young journalist who wants to interview him about his life and work. In the beginning (First Image), they discuss about the civil war, the ideologies and the killings of the fighters of Psarros' regiment by ELAS (The Greek People's Liberation Army). Then (Second Image), they talk about their lives and try to cope with the attraction and repulsion they feel for one another, but are led to an impasse and amorous desolation.

“In the lovely years of vegetarianism”, sings the narrator at some point in Requiem Akhmatova. Directing a performance in our “lovely years of the pandemic” is not so much a challenge as it is an act of surpassing ourselves. And that is because the entire creative team of this performance, after a long time of forced inactivity and cancellations, threw themselves into its implementation with tremendous zeal and absolute concentration, putting aside the everyday uncertainty about whether theatres will remain open or not, or the fear that one of us may have to be quarantined or get sick. At the time of writing this note, it is still uncertain whether the performance will be played before a live or an online audience. Nevertheless, we hope that the honest expression of the two performers in the pungent and multilevel performance that –I believe– is demanded by the two works of Haris Vrondos, the truth of these characters, which we attempt to show on stage, will reach the viewers in the stalls, or break through the fourth wall of the screen and find, in any way possible, its audience.”

The performance was video recorded on 24 November 2020 on the GNO Alternative Stage at the SNFCC. Subtitles are available in Greek and English.

Libretto: Haris Vrondos, based on the poetry of Anna Akhmatova and the adaptation of a poem of Anne Carson by Haris Vlavianos 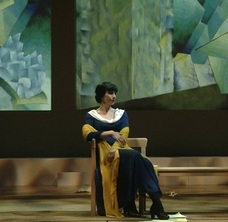