Available for on-demand streaming until 31 August 2022
on nationalopera.gr/GNOTV/en

The Greek National Opera Alternative Stage presents Domna's Song exclusively on GNO TV. The performance will be available on nationalopera.gr/GNOTV/en from 16 July until 31 December 2021 with Greek and English subtitles, as part of the tribute to the 2021 bicentennial of the Greek Revolution. 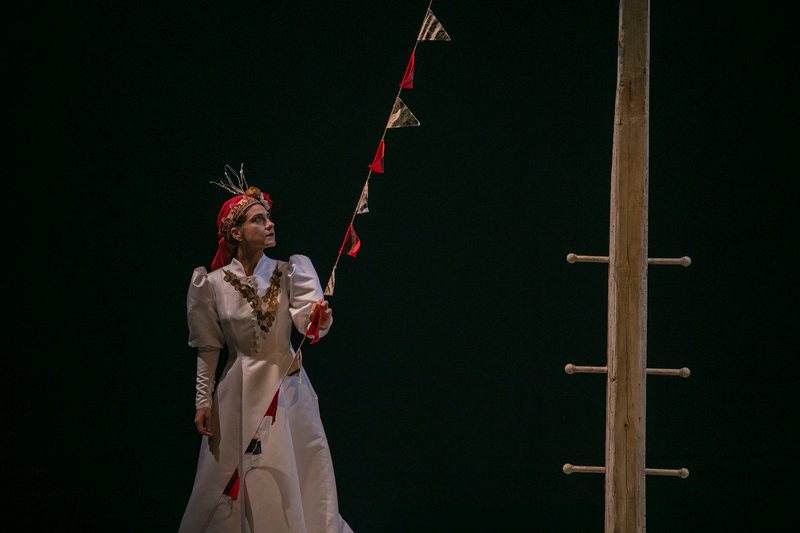 Between the warps of the historical events -years of romantic ideas, patriotic visions, bitter frustrations-, the incidents of her turbulent personal life pass like weft: motherhood, widowhood, financial disaster. Domna weaves her fate alone, an "obedient patriotess" who sacrificed her possessions and family to "build the golden palace of Liberty". In the new Greece, homeless and destitute, she barely received a drop of help. She never asked for, nor was given any honours for her service to the motherland. She passed her last years in a little cottage by the sea of Piraeus. In her last afternoon before passing away in the age of 67, she may have lit the lamp in her room and heard from the window, before night fell, the breath of a familiar breeze from the north of the Aegean Sea.

Domna's Song uses historical evidence (archive records, testimonies of the time, documents, ship logs, letters) as raw material, and processes it with various writing styles, ranging from the folk fifteen-syllable verse to experiential writing, to convey the external reality of events and the characters' inner life.

Domna Visvizi's story in the form of a monologue with choral stasima is portrayed with sensitivity by actress Syrmo Keke, and woven through means of music theatre by a female creative team consisting of journalist/author Maro Vasiliadou, composer Martha Mavroidi -who knowledgeably interlaces folk musical styles with contemporary ones- and directress Maria Magkanari.

This production, part of a tribute to the 2021 bicentennial of the Greek Revolution, is made possible by a grant from the Stavros Niarchos Foundation (SNF) [ www.SNF.org ].

With Greek and English subtitles 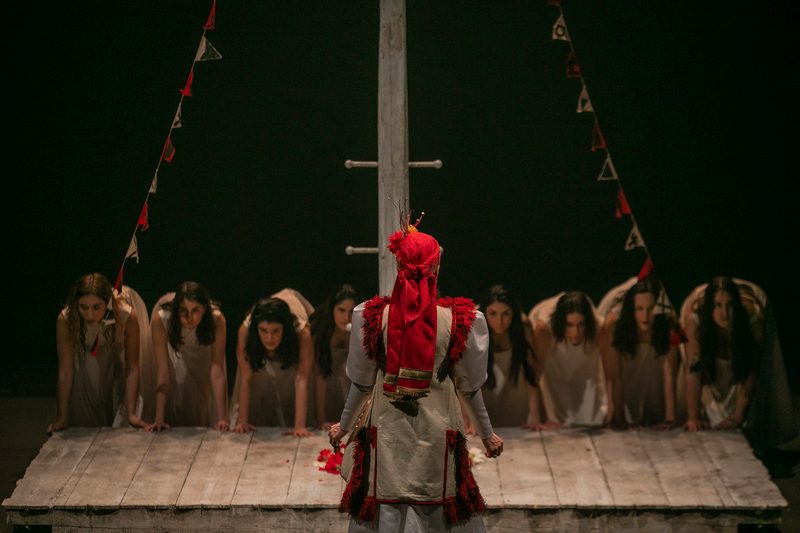 As the composer Martha Mavroidi notes: " The music of Domna's Song is deeply influenced by the musical traditions of Greece and the Balkans. The composition takes place on two levels: a literal one, referencing the music of the broader Thrace region through the choice of instruments, rhythms and modes; and a metaphorical one, treating the musical idioms with freedom and utilising the instruments' timbres in order to create soundscapes that address the subconscious. The writing is multilevel, developing simultaneous musical actions, parallel universes that co-exist at the same moment, so that the listener's consciousness may expand and subsume them in a unified musical experience. The ney, the kemençe and the saz converse with the piano, the cello and the double bass, continually engineering new textures that go back and forth between action and evocation. The female voice features centrally in the work, harnessing song as vehicle of expressing the ineffable, but also as mode of empowerment, through the intertwining of voices in polyphonic parts that combine traditional polyphony and contemporary harmony. This musical work is also a profession of admiration in the face of the beauty and richness of traditional music and its enormous legacy of breathtaking verses and perennially pregnant melodic kernels - the legacy of those anonymous versifiers and musicians who took hold of their art with care and sensitivity, enriching it before bequeathing it to their successors. "

As to the text, journalist/author Maro Vasiliadou notes: " The first time I saw Domna Visvizi was when I came across her bust at Pedion Areos park. She seemed somewhat stern to me, with her tightly tied headscarf, uncomfortably placed among the men of the celebrated Avenue of Heroes. I didn't know her. And perhaps I still don't really know her, although I've spent two years with her, first trying to recreate her life and then to put it on paper. I do love her though, as if she were a part of my family, an imaginary great-grandmother who came and stood close to my real grandmother: one was a Thracian woman who was uprooted in 1821, the other a woman from Asia Minor who was displaced in 1922. In Domna's Song the fates of many women cross, because Domna lived many lives in one lifetime. Each one of them has their own voice: the bride in love of the 1800s, the young mother who lulls her children at sea, the widow who takes over the leadership of a warship amidst the flames of the Revolution, the destitute who seeks justice standing day and night in front of the doors of a faceless central administration. Which one of them was passionate about the vision of liberty, which one was frightened, which one regretted her sacrifices, which one was enraged, which one wept and then swallowed her tears? "

The direction bears the stamp of Maria Magkanari. As she notes: " When I first read Maro Vasiliadou's play, I intuited that it operated within a comparable region. The writer created a heroine entering the revolution as if a dream. Ours is an earthy Domna, carrying the sounds, smells and traditions of her native land. She has premonitions. She meets her destiny in the way folk-song heroes meet theirs. The revolution would create a cut -or, rather, a crack- in her life: there would always be a before and after. The struggle for freedom would be experienced as a site of female liberation, as well as a source of grief and personal loss. The play, though composed in a historical framework, is a poetic work - or, even better, a song. It persistently demanded to be embodied, sung, so as to reveal its riches. Its secrets and its paths were revealed slowly, in rehearsal. Marriage, motherhood, war, mourning, memories: the sounds of a life. In the hands of Martha Mavroidi, they became a thrilling song: Domna's song ."

With the participation of the female vocal ensemble chór εs 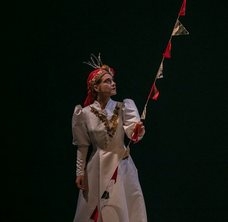 Available for on-demand streaming until 31 August 2022