Available for on-demand streaming
until 31 December 2022

Under the patronage of H.E. the President of the Hellenic Republic Ms Katerina Sakellaropoulou

This production, part of a tribute to the 2021 bicentennial of the Greek Revolution, is made possible by a grant from the Stavros Niarchos Foundation (SNF) [www.SNF.org].

"Heroes would rather die than become slaves", sings Despo a while before blowing up Dimoulas' castle (Riniasa Castle) at Zalongo, to end her own life and her family's life, and to avoid surrendering to Ali Pasha'sTurkish army, in the last scene of the one-act melodrama Despo, the heroine of Souli.

Although it is Carrer's third opera based on a Greek theme (following Markos Votzaris and Frossini, and preceding his last work Marathon-Salamis), in the libretto's first edition it is described as the "first Greek tragic melodrama"; that is because on the one hand its original language is Greek -the librettos of his two previous operas were translated and adapted to Greek from Italian-, and on the other hand because the work's Greek character is also highlighted by the music - "the Greek musical colour reflects the style and unity of the subject matter", as he himself writes in his letter to the Athens Conservatoire, a few days after the completion of his work (August 1875). Carrer's wish was to have his work staged by the students and teachers of the newly founded Conservatoire. However, due to the financial problems and artistic weaknesses of the Conservatoire's students, Carrer would have to wait several years to listen to his work being performed. It was first premiered by an Italian troupe, in Italian, at the Apollo Theatre in Patras (January 1883). The libretto was penned by Antonios Manousos (1828-1903), acting teacher at the Athens Conservatoire, and it was probably based on the famous folk song "Despo's song", which the author himself had published in his Collection of Folk Songs in 1850 on Corfu.

The birth of Greek melodrama through Carrer's work is part of the wider Greek artistic landscape that emerged after the mid-19th century: literature witnesses the birth of the novel, with special emphasis on historical novels (Stefanos Xenos, Konstantinos Ramfos); poetry is influenced by the Klephtic folk songs (Aristotelis Valaoritis, Ioulios Typaldos); and modern Greek painting mainly depicts scenes from the Greek Revolution through the work of the founders of the so-called "School of Munich", Theodoros Vryzakis and Dionysios Tsokos. The inspiration from the immediate heroic past and not from the contemporary problems of late-19th century's Greece probably reflects the disappointment of artists for the fact that the Revolution's expectations for justice and democracy did not come to fruition.

With the Orchestra and the Chorus of the GNO

With a 10-euro ticket viewers can enjoy this production from the comfort of their homes at nationalopera.gr/GNOTV/en, at any time they choose, on their computer, ipad, TV or mobile phones. The ticket offers the possibility to access the performance for an unlimited number of times over the course of a 30-day period starting from the first streaming. 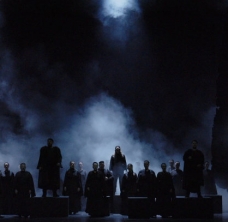 Available for on-demand streaming until 31 December 2022