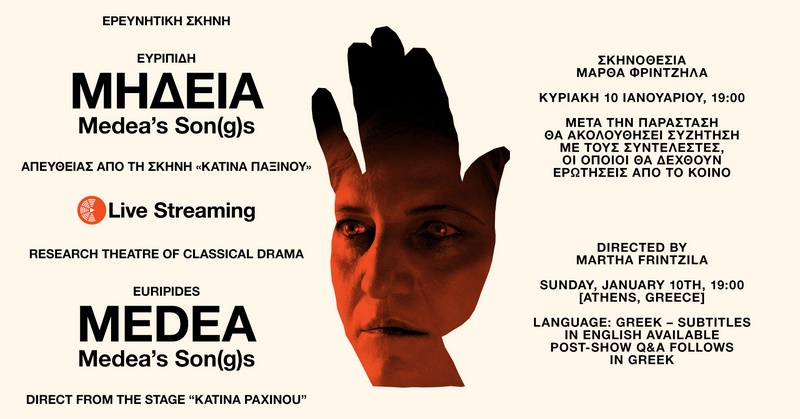 The National Theatre of Greece is inaugurating its Research Theatre of Classical Drama with a live streaming of Euripides' Medea directed by Martha Frintzila.

The main aim of the newly created Research Theatre is to study ancient Greek drama by examining its conventions, investigating modern ways of approaching it, and highlighting its potential in terms of stage practice and performance. Its theatrical offerings bear the stamp and quality guarantee of enlightened directors and figures from the intellectual and artistic sphere. The 2021 season opens with Medea, performed in a new translation by Nikoletta Frintzila.

It will be preceded by a short speech from the Artistic Director of the National Theatre, inaugurating the Research Theatre of Classical Drama.

Afterwards, there will be a live discussion with the actors and creative team. Questions can be asked by text message.

Shaped by passion and revenge, Medea - one of Euripides' most paradoxical tragic heroines - is an unfathomable dramatic riddle, as she survives her own destruction by committing the unthinkable: the murder of her children. A complex, impenetrable personality, she hovers between human maternal feelings and the heroic imperatives of honour and justice. In a foreign land, betrayed and faced with unexpected disappointment, the archetype of female strength kills what is dearest to her and becomes the protagonist of the pain caused by her own horrific act.

"The play begins and everything is over. The price of the entropy triggered by Jason's infidelity is so high that the situation is irreversible. There will be victims to be mourned."

I have already been studying Medea for four years, yet if I worked on nothing else for the rest of my life, I don't think I would have anything more to add. Whatever I write has already been said better. I won't say anything new. Perhaps that's what Medea is for me: its endless readings, translations and analyses, the reiterated thoughts that it gives rise to, the painstaking efforts of directors, actors, designers and composers for more than two and a half thousand years.

Our production is a response to Euripides' poetic masterpiece, but is also offered to those who, overcome with awe though they may be, have anxiously attempted to enter into dialogue with it. It would not be true to say that our Medea is something wholly new. The heart-rending voice of Callas and the passionate singing of Paxinou ring in our ears. The great Japanese actor Mikijiro Hira spinning while slowly pulling the red ribbon of his innards up through his mouth; the mythic arena of Anatoly Vasiliev, with Lydia Koniordou in the centre cradling her dead children on a tricycle; the figure of Kariofyllia Karabeti painted a martial crimson; Lydia Fotopoulou a trapped lioness in Andreas Voutsinas' production; and the dark eyes of Melina Mercouri's rebellious Medea in Minos Volanakis' production are images that have left an indelible impression on us. We are haunted by Manos Hadjidakis' choral ode for Eros. The Medeas of the great Pasolini (imperious) and von Trier (enigmatic and frozen) accompanied our endeavours. In our production we would like them to be discernible behind the forms and movements, to be hidden in the sounds.

For us, Medea is not just the text. It is the text above all, and it is heard without cuts, additions or interpolations. However, everyone who has worked on this production knows that these words are not utterable, the acts are not showable. The play is not playable.

The mysterious existence of our Medea is forever joined with that of her two sons, Pheres and Mermerus, with whom she dwells in a place between dream and reality, in a space contained within and situated outside the woman, mother, priestess, witch, refugee and foreigner. That is where she tells - and will perpetually retell - her story. Her sons re-enact the episodes of her life. An orchestra plays and she sings her songs in all eternity. In this mysterious landscape, Medea creates her own solar system, where, as a fragment of the sun, she sets the bodies around her in orbit and incinerates any that come dangerously close to her.

If the theatre is the mirror of real life, ancient drama is a reflection of the bottomless depths of the human soul. Ancient drama is the proof that only in the theatre can the depth and breadth of existence be shown. I often wonder how it is possible that these texts were even written."

The livestream will be available at livestream.n-t.gr with the purchase of an electronic ticket (password required).

A digital programme, which includes the production text, can be purchased from the National Theatre of Greece website www.n-t.gr or from www.ticketservices.gr. 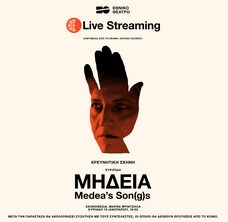 TICKET PRICE
8€
EVENT PROGRAMME
Now, along with your live stream ticket, you may also purchase the event programme in PDF format (Greek only)
click for info
NOTES
- You may watch the play online with a ticket
- After purchasing your ticket you will receive an email with the web address and your access code
- Only one ticket per transaction is required
- Tickets (access codes) can be validated on the day of the live streaming, 30 minutes before the play starts (after 18.30)
- The play starts on a fixed time and is streamed online in real time. You may not pause or rewind to an earlier time, so please make sure you check in on time.
- The viewing platform can be accessed through internet using a recent version of most popular browsers (Chrome, Firefox, Edge, Opera, Safari). Javascript should be enabled, and so should be cookies.
- Each ticket can be used in only one device at the same time. If you need to change device, you should first click on the "close stream and release code" button.
- You may view the play in your Smart TV, by connecting your computer and the TV with an HDMI interface cable. Also, some Smart TVs can access the streaming website through their native browser, but please note, that not all of them do (The browser should support HTMLL5, Javascript, Cookies and H.264 video decoding).
- You may test your viewing equipment by visiting https://livestream.n-t.gr/test-video and using the test code "1234567890"

PRODUCED BY
NATIONAL THEATRE OF GREECE