The lady from Maxim's | Georges Feydeau 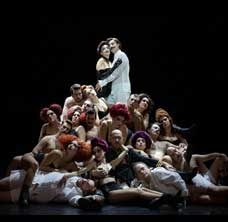 NATIONAL THEATREZILLER BUILDINGMAIN STAGE22-24 Αg.Konstantinou str. (Omonoia square)Box office: 2105288170-171TICKET PRICESWednesday & Thursday18¤ Distinguished15¤ A & B Zone (1st Balcony)10¤ C Zone (2nd Balcony)Friday18¤ Distinguished13¤ A & B Zone (1st Balcony)10¤ C Zone (2nd Balcony)Saturday, Sunday, Holidays25¤ Distinguished18¤ A Zone15¤ B Zone (1st Balcony)10¤ C Zone (2nd Balcony)Student/Persons under 26y.o.Thursday: 10¤Other days: 13¤(excluding distinguished zone)Persons over 65 y.o.Wednesday: 10¤Other days: 13¤(excluding distinguished zone)Members of large families (>=4 children)10 ¤ all days(excluding distinguished zone)Unemplοyed5¤- Only Wednesday/Thursday- Only at the theater's box officeIn order to purchase tickets with discount prices one must provide the corresponding papersADVANCE SALES- NATIONAL THEATER BOX OFFICES- TICKET SERVICESby phone: 210 7234567online: www.ticketservices.grIncluding a service fee of 7.5%Box office:  39, Panepistimiou Str, Athens- PUBLIC STORES
all Public StoresCOLLECTING TICKETSTickets purchased online or by phone can be collected at the theater's box office, by providing an IDE-TICKETYou may download your tickets as a PDF file and print them or have them stored in a mobile device and show them during admission.Price policy of the National Theater (in Greek)

The lady from Maxim's Georges Feydeau
ZILLER BUILDING - MAIN STAGE
Feydeau's farces, characterised by ingenious staging devices, inspired satire and a frenzy of anxiety combined with outrageous coincidence, lead with mathematical precision to an explosion that is constantly forestalled. Georges Feydeau, an heir to Moliere who rejuvenated French vaudeville theatre, was an acute observer of the manners and mores of his time and a sardonic commentator on society's ills. The lady from Maxim's, written in 1899, was such a success that it allowed Feydeau to take some time off from the theatre and devote himself to his other passion, painting.
A strait-laced doctor, Petypon, wakes up at home after being dragged out to paint the town red by his young friend Montgicourt. He remembers nothing of the night before, but discovers a young dancer from Maxim's in his bed. In an instant, his life is turned upside down. However, his new acquaintance refuses to leave his house, even when his extremely religious wife shows up. What ensues is absolute panic...
creation team
Thomas Moschopoulos
Translation, direction