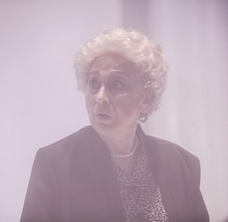 "The Happy one", Marina Karagatsi's novel ("Diavazo" Literary Magazine Award, 2009) after being presented in the Poreia Theatre, and directed by its Artistic Director, Dimitri Tarlow for two seasons, is now travelling in Andros International Festival.
The theatrical adaptation (by Eri Kyrgia) transforms the apologetic, reviewing and forgiving monologues into a full-length play and directly transports us to the home of the emblematic Greek author M. Karagatsis, who suffered from severe insomnia. Within three sleepless days and through his little daughter's gaze, come to light all that has haunted and hurt one of the most reputed families in Greece - or just a family. And if the dark moments outnumber the bright ones, the reconciliation with the past turns out to be the only way.