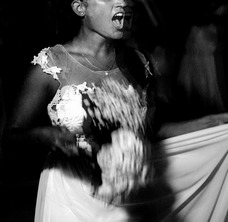 Description of the play

In a period in which we are asked to start from scratch, being based only on ourselves, we realise that people increasingly feel the need to understand their origin.

Both children and adults need to listen to a fairytale before they fall asleep; a fairytale which justifies the things that the mind cannot explain.

The performance tries to introduce or remind us of a great work of the ancient world and global intellectby employing an original, bodily narration.

In the same way as Hesiod returns to the primary materials and roots of the world, the performance also uses the body, its properties and its abilities as the primary material and narrative tool. This play is not based on the scenery, costumes and lighting. It is focused on the actors, on the human beings; it is based on human imagination and inventiveness.

It is suggested that the play is presented at the Ancient Epidaurus Little Theatre- a space that, in my experience, functions as a channel where the narration and meaning are released and exculpated.

We aim to create a lively, fun and touching performance which will make us wonder which is our own Earth, our own Sky and our own Chaos.

Sophia Pashou studied in 'Arhi' Drama School and in London International School of Performing Arts (LISPA). She completed theLISPA pedagogical training program on scholarship and entered the School's workforce. She is a founding member of the 'Patari Project' group, in which she has directed the following performances: '10 cm up', 'Odyssey', 'Bal in the Air', 'I catch a Shoe on the Piano', 'Nose' and 'Hionani'. As an actress, she has collaborated with LiloBaur, with Helen Chadwick at the Royal Opera House in London, with DessislavaStefanova, with the 'Out of Chaos' and 'Babakas' groups etc. She has also been responsible for the element of movement in the following plays: 'Iphigenia in Tauris' (National Theatre of Northern Greece), 'K's Trial' (Porta Theatre), 'Arrival' (Ancient Epidaurus Little Theatre), 'Candide or Optimism' (Porta Theatre), 'Fahrenheit 451' (Athens Festival), 'Frogs' (Epidaurus Festival) etc. Regarding her educational activity, she runs courses and seminars for children, adolescents and actors. She is an external collaborator of the workshop of KseniaKalogeropoulou's Porta Theatre, of London Bubble and of the BE-Festival. She has also taught at the Birmingham School of Acting and at the National Theatre of England.