Argyro Chioti
The Frogs by Aristophanes

Argyro Chioti
The Frogs by Aristophanes

Does Poetry have a place in a seemingly prosperous society? In this hilarious and thoughtful satire, Aristophanes depicts a descent to the Underworld, in quest of the poet that will save the ailing city. The poetic duel between Euripides and Aeschylus is sidesplittingly funny as well as giving us food for thought, especially in our current times of cultural poverty, with poetry more instrumental than ever in securing some form of social unity. The play will be presented in a new, modern Greek translation by poet and translator Nikos A. Panagiotopoulos, in this performance directed by talented Argyro Chioti in her debut at the Ancient Theatre of Epidaurus.

The text will be published as part of the Festival's newly launched theatre book series, featuring Nikos A. Panagiotopoulos' new translation, with an introduction and a complete list of previous productions of the play by Professor Agis Marinis.

With Greek and English surtitles


Translated by Nikos A. Panagiotopoulos

Assistant to the director Katerina Kotsou

Special thanks to Municipality of Moschatos - Tavros for their hospitality, the Culture, Sports & Youth Organisation of the City of Athens (OPANDA), and the Onassis Culture Centre. 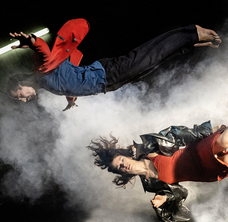