On Monday, December 19, at 20:00 and on Monday December 26, at 18:30, the Stavros Niarchos Foundation Cultural Center (SNFCC) will be welcoming at Stavros Niarchos Hall the beloved singer Alexia, with her timeless presence and unique voice, in a very special collaboration with the multicultural symphony orchestra of El Sistema Greece.

El Sistema Greece joins forces with Alexia and her band to present some of the world's best loved Christmas film songs, dating from the early 1900s to the golden age of Hollywood, under the baton of conductor José Ángel Salazar Marín. Combining jazz with classical music, the masterful musical arrangements ingeniously transpose the sounds of jazz, gospel and swing soundtracks straight into the heart of Athens. 60 young musicians, aged 10-26, featuring a diverse cultural background and tracing their origins in 30 different countries, interpret adaptations of classic tunes to accompany Alexia's authentic jazz vocals and create a warm and fuzzy holiday atmosphere.

An unexpected joint appearance, featuring much loved Christmas songs, as well as international hits that are associated with this most magical time of the year, in new exciting covers.

Alexia is an internationally acclaimed and multi-award-winning singer, composer, songwriter and social activist, who has been repeatedly awarded gold and platinum records and has interpreted various different musical genres. Boasting a 40-year-old career and 45 studio albums, she has developed her very own eclectic musical style, inspired by a wide range of musical genres. Her innate vocal skills, her personal style, her expressive interpretation of songs, the timbre of her voice, with its three-octave range and her characteristic vibrato, embody the essence of her pioneering sound. Alexia has worked with some of the world's leading musicians, including Mikis Theodorakis, Chick Corea, John Patitucci and many more. She is a human rights advocate, and continues to broadcast her love of music through thematic concerts worldwide.

The educational music project for social inclusion El Sistema Greece offers free music education to children and young people, aiming to build a community, revolving around music, with no restrictions or discriminations. Founded in November 2017, El Sistema Greece Youth Orchestra is a multicultural orchestra of educational nature, which offers a unique orchestral learning process based on the principles and pioneering teaching practices of El Sistema Venezuela. The orchestra is open to young musicians aged 8-26, who play an orchestral instrument, regardless of their national origin, language or religion. The SNFCC has been supporting El Sistema Greece since its beginnings, and has repeatedly hosted its students, allowing them to participate in high-level concerts and acquire valuable musical experiences. 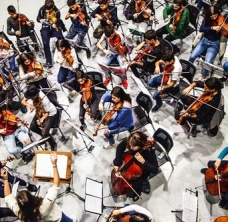 Concession tickets of 5€ are available to students, people aged 65+, minors up to 17 years old, the unemployed, companions of Persons with Disabilities, multi-child families and residents of the Municipality of Kallithea.

On the day of the event, concession ticket holders will be asked to show their ID, as well as supporting documentation (student card, unemployment card, family status certificate for multi-child parents, utility bill for residents of Kallithea)

Free tickets are available to Persons with Disabilities, by contacting the call center at 210 7234567 or via email at info@ticketservices.gr and by showing their ID and certification of disability on the day of the event.