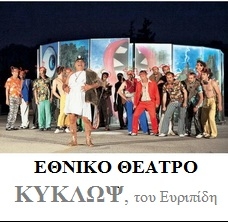 Silenus and his sons, the Satyrs, set sail in pursuit of the Tyrrhenian pirates who have captured the god Dionysus, but are shipwrecked on the island of the Cyclopes, where they work for Polyphemus as shepherds and stewards.

Their lives are full of hardship until the arrival of Odysseus and his companions. Silenus gives them a warm welcome and offers them his master’s cheese and meat in exchange for wine, but claims to Polyphemus that the Greeks have robbed and brutally beaten him. In vain, Odysseus attempts to convince the Cyclops of the truth, asking him to respect the laws of hospitality. The Cyclops, however, leads the Greeks to his cave, where he devours two of them. Odysseus hatches a plan to take revenge on Polyphemus, which results in the Cyclops being blinded.
No longer able to see, Polyphemus exits his cave threatening to kill Odysseus and his companions, but they have already sailed away, taking the Satyrs with them.
Euripides’ Cyclops is the only complete satiric drama still surviving. It was probably written between 410 and 415 BC but we do not know which tetralogy it belonged to. The play’s plot draws on book nine of Homer’s Odyssey and enacts Odysseus’s well-known encounter with Polyphemus from a different perspective, through Euripides’ addition of the Satyrs.
The central theme of Cyclops is the clash of primitive instinct, represented by Polyphemus, with civilisation, in the form of Odysseus. The presence of the Satyrs creates a Dionysian atmosphere that emphasises the characters’ playful side.