The black comedy Playing the victim, written in 2002 by the award-winning Oleg and Vladimir Presnyakov, makes its first appearance in Greece. The Presnyakov brothers are among the best-known contemporary Russian writers and representatives of “new drama”. Their works are often characterised as black comedies, full of sarcasm, irony and overt intertextuality. Their themes revolve around the paradoxical violence of modern life and they describe their works as “farcical-philosophical” or as “a circus with horses”. As they have stated in interview, they fear “that one of them has invented the other and that there may not be two of us”.

Playing the victim follows the story of the young Valya, who lives and sleeps without taking off his hat, eats only with chopsticks, and frequently sees the ghost of his dead father. He works for the police, playing the victim in crime-scene reconstructions: a wife who may have been accidentally killed by her husband, a young woman drowned in a swimming pool by her foreign lover, or a man murdered by a former classmate at a school reunion. Meanwhile, at home, his mother needs someone to look after her, his uncle pays increasingly frequent visits after the death of his father, and his girlfriend ultimately wants an adult life. At home, as at work, he feels that everything is a reconstruction. That everyone is playing a role while he, disorientated and numbed, attempts to define his place in a world that seems to have gone mad and doesn't know where it is going.

The play premiered at the Edinburgh Fringe Festival and was first performed in Russia two years later, at the Moscow Art Theatre in a production directed by Kirill Serebrennikov which caused uproar and led to protests. Then, in 2006, the play was brought to the big screen by the same director, scooping the main prizes at the Kinotavr Film Festival and the Rome International Film Festival. 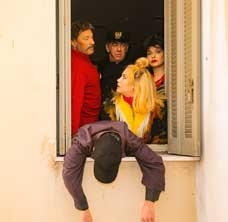 Unemployed
5€
- Only Wednesday/Thursday
- Only at the theatre box office