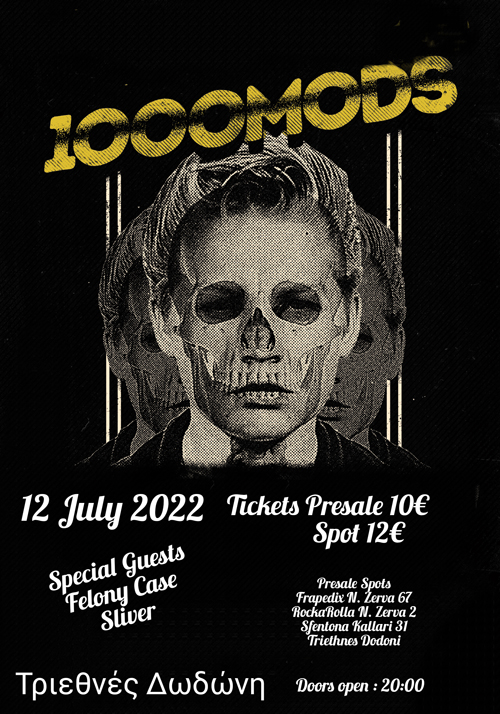 1000mods is a psychedelic/heavy rock band from Chiliomodi, Greece. They were formed in the summer of 2006, and since then they have played over 500 live shows, sharing the stage with bands like The Black Keys, The Black Angels, Graveyard, Brant Bjork and many more. They are known for their commitment to vintage equipment, thick and heavy analog sound and remarkably passionate stage performances.

In October 2010, the almighty Billy Anderson visited Greece in order to produce the bandΆs debut album, while Malleus Rock Art Lab took care of the artwork. "Super Van Vacation" was born. In order to promote their debut album, they played 40 shows in 15 countries around Europe, including festivals such as Rockwave festival,B'estfest and Lake on Fire.
After two successful European tours, the band was ready to get down to work again. Their experiences and growth paved the way for their upcoming album, “Vultures” which was released on the 30th of May 2014.

Two European tours followed with a massive two-month tour on October/November 2014 and a tour supporting The Atomic Bitchwax during May 2015.

The time has come for 1000mods to get their effort to the next level. “Repeated exposure to…” was released on the 26th of September 2016, being their best album to date as well as an inspirational mixture of all thatΆs heavy in the glorious 70Άs and the 90Άs heavy rock movement. Having been recorded with hi-end outboard equipment in a non-stop 24/7 procedure, produced by both the band and sound engineer George Leodis and mastered by living legend Brad Boatright (the audio mastering engineer of Sleep's "Dopesmoker") “Repeated Exposure to…” sounds thick, beefy and tight, as a modern heavy rock album must sound.

Not much later, the band departed for a 27-date European Tour with Monkey3 and Moaning Cities, participating in leading festivals such as Up in Smoke Indoor Festival In Z7, Desertfest Belgium, Desertfest Athens and Keep it Low Festival. The Greece/Cyprus leg of the tour followed, playing in 12 different cities with all the shows beeing full packed or Sold Out.

Their 2017 “Repeated and Exposed to” tour featured a total of 42 live dates in 17 European countries, including –once again- appearances in acknowledged European festivals such as Desertfest London, Desertfest Berlin, Under the Black Moon Festival in Munich and Riff Ritual Fest in Barcelona. The band did 14 Sold Out shows.

In February 2018, the band toured for first time in North America playing 29 shows in U.S.A, Canada and Mexico. The tour was extremely successful and the band is already planning to get back in the States during 2019.

In April 2018, 1000mods toured again in Europe, playing for first time in Scandinavia. Into the Spell tour featured 16 dates in Scandinavia, Baltic countries and eastern Europe and took the band to the next level with noumerous Sold Out Shows and full packed venues. Their tour included their first appearance at Hellfest Open Air Festival and their first headline show in London at the legendary Underworld Camden, which was Sold Out from presale. Their tour for 2018 featuring more than 80 shows accross Europe and North Ameica, came to end with their biggest headline show in Athens yet, at Theatro Vrachon, where the band performed in front of 3500 people.

Felony Case
Felony Case is a Hard Rock band from Ioannina, Greece. Formed in the early 2015, the band brought together musicians of different ages and varied musical background. As such, their musical compositions defy the typical dividing lines of musical genres. On their first EP, you will find songs that reflect the Hard Rock sound of 1980s, yet with the additional energy of more recent years, killer solos and vocals from heaven.

The band was born as a revival of the music of the decade of decadence. Glam metal bands, like Motley Crue, Cinderella, Guns nΆ Roses and Dokken were the musical influence of (almost) all members of the band. This is evident in their riffs, as created by the Riff Maester of the band, George. Their compositions borrow the badassery of that era, and are complemented by the female rock vocals of Elena, creating a reminiscence of all great female fronted rock bands on the 1980s. The rest of the band members, Vangelis, Antonis and Alex, convey an endless groove that just makes you bang your head.
Catch any of their live performances and you will find yourself caught between an energy rush and a melodic journey. They have performed in various venues, from big stages like the StreetMode Festival (Thessaloniki, 2019), and the Artmode Festival (Ioannina, 2018), to smaller venues, using only their acoustic instruments. Interestingly, they are equally effective in exciting the crowd in both scenarios.

The band's debut EP- Strangers Give More- was released in late 2019. Since then, they have been working on new tunes with a fresh sound. Their new album, a collaboration with George Tzachristas (Neperia) that will be released sometime in 2022, will have a heavy synth sound, with an added rock guitar distortion and extra funky grooves. The first single entitled "Secret Love" was released in December 2021. You can check it out in all streaming platforms.
To keep up with the latest news, like their Facebook page and follow them on Instagram. 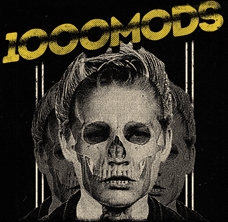