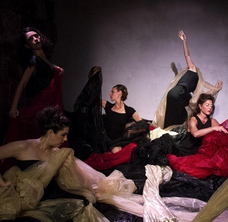 Federico García Lorca's songs are performed
as an epic representation of the world
focusing on the female form.
The popular cycle of the thirteen traditional Spanish songs (canciones populares) that the great poet and musician collected and adjusted for female voice and piano, explores the global themes of traditional songs: the drama of life and its stages, joy and sorrow, love and heartbreak, death, work and the struggle for survival, war and peace. Also, the songs explore the play, nature and its landscapes, affectionate moments such as a lullaby, celebrations, weddings and ceremonies which express the collective life of a society, and national, religious or simply local pride. One of the songs contains the phrase 'Viva Seville!', while bullfight is probably the only purely Spanish theme of the songs.

The performance of the Microscopic Theater links the song themes with a stage action that is undivided in space and time, without linear narration. Each microscopic movement or gesture of the dance is recorded to the entirety of the play at any moment, thus it is not necessary that the narration is linked with the individual themes or that the audience simultaneously focuses on the song lyrics. The cohesive forms of the action are the ones of reflection and dream, as the dancers dive in the fertile collectivity of the unconscious in order to improvise the expression which fits every moment the most. Instead of describing, they commune; instead of performing, they embody. The images which are created on the stage sometimes illustrate the visible world and sometimes illustrate the shifting and the changes of the mind and the soul.

The song of the lyrical singer Roxani Papadimitriou is the source and the element that gives birth to the performance. As the singer is fully integrated in the choreographic action, she remains 'invisible', however, in essence, she expressively and mentally guides and defines the performance. She functions as a catalyst that converts the action of the dance group into a musical event. Thus, the performance, due to its morphological distinctiveness, can be described more properly as a 'musical installation' and not as a choreography.

The title 'Goodbye, Girl' refers to the female coming of age as a motto, a wish and a riddle.

The Microscopic Theater is a theatrical venue located in the centre of Athens, in Plaka; it has been presenting the Microscopic Theater dance group for the past five years. The core members of the group have been cooperating with the choreographer Anastasia Lyra for at least twenty years. The choreographer's main scope of work centres on classical music and dance improvisation.

The group of the Microscopic Theater has all the characteristics of an ensemble which relies on the long-standing cooperation of the majority of its members.