A thousand and one tales | Mike Kenny 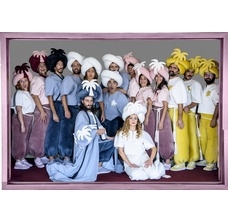 A thousand and one tales Mike Kenny

Can a story change your destiny?

One of the most popular works of world literature, the collection of tales and stories A thousand and one nights is the inspiration for A thousand and one tales (originally entitled A tale to tell), which comes to the Young People's Stage this year in a version by Mike Kenny, the award winning playwright of Boy with a suitcase and many other well-loved plays.

The mythical East is brought to life on stage as a dozen courtiers and the sultanΆs crazy band ingeniously use every means at their disposal to tell stories about war and love, evil wizards and hilarious buffoons, fear and laughter, monsters and heroes, magic carpets and winged horses, and giants and clowns. A mosaic made up of comedy and cartoons, music and multi-coloured sets and costumes inspired by the mythical East creates a unique story that in turn contains many smaller stories within it.

“Long, long ago and far, far away, in a land that never was, is not and never will be, lived a great Sultan…”. Wounded and disappointed, every night he marries a new wife and every dawn he puts her to death.  However, everything changes when he marries Scheherazade, the daughter of his faithful vizier, who is also perhaps the finest storyteller of all time.  And so it is, that night after night, the same demand is heard in the palace: “Tell me a story”.